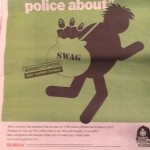 “Councils, police and other local agencies will be forced to support victims of persistent antisocial behaviour as part of plans to give them better tools and powers outlined by crime prevention minister James Brokenshire today.

This follows a review that found there are too many tools for practitioners to tackle ASB some of which are too bureaucratic, too costly and do not address underlying problems. At the same time, the growing numbers of people who ignore their penalties suggest a persistent minority are still not being deterred from committing ASB.

A public consultation, launched today, proposes a number of new measures to better protect communities from the serious harm caused by criminal and antisocial behaviour.

Subject to consultation the new tools will replace 18 of the formal powers currently available. They will be more flexible, quicker to obtain and less bureaucratic for police, courts and other local agencies, making it easier to deal with persistent offenders.

‘It is time for a new approach that better supports victims and makes it easier for the authorities to take fast, effective action.

‘This consultation sets out a how we propose to tackle this stubborn problem, ensuring the most vulnerable in our communities are protected from the cowards and bullies who carry on in such an offensive manner.

‘It is important there is no let-up — local areas must continue to use the most appropriate powers available to them.’

Louise Casey, commissioner for victims and witnesses, said: ‘In my role as victims’ commissioner I have seen first hand the powerlessness and despair that victims often feel when they are targeted again and again by anti-social and criminal behaviour. So I am heartened by the announcement of the new proposals today that put tough enforcement action against perpetrators at the centre.

‘I am pleased that the message being sent out from government today is that there is no excuse for police and councils to stand by and allow their communities to suffer from lawless, mindless thuggery that makes people’s lives unbearable.'”